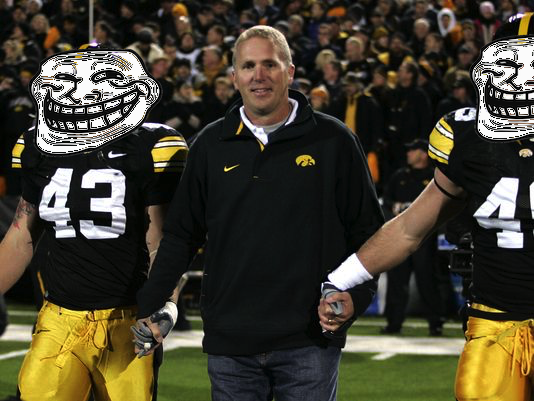 We like to think our sports memories can explain a lot about us as people. My life is surely more enriched/has been shaped by having experienced Tony Gwynn’s World Series home run at Yankee Stadium in 1998, Kawhi Leonard’s dominance in the 2014 NBA Finals, and Ricky “The Dragon” Steamboat walking away with the Intercontinental Championship at Wrestlemania III; “Macho Man” Randy Savage receiving well-earned comeuppance for smashing Steamboat’s larynx with the ring bell mere weeks earlier (SMH)! More realistic, and more formative for this Aztecs/San Diego sports fan, was the 1986 Holiday Bowl.

Denny Stolz came to town and turned a sixth-place Aztecs squad into a first time WAC champion (we’ll forget about subsequent seasons), winning the right to face 19th-ranked Iowa in San Diego! I was 6 at the time, so I didn’t really understand all of that … but I sure was excited the Aztecs were playing at home.

Early in the game, Rick Bayless (no, not the celebrity chef/brother to one of sports media’s leading assholes) scored to put Iowa up 7-0. Bath time, according to mom. What’s the point?

The Aztecs made me cry in the bath tub.

The rest of the game saw the two teams go back and forth, with the Aztecs taking the lead in the last minute. They were going to pull off the victory! My memory is a little fuzzy on this next part, but I believe this is when the ghastly figure of Death itself appeared before me and suggested I sit down and see how a lifetime of sports fandom was going to play out. “No,” I was assured, “it’s too late to back out now.”

The ensuing kickoff was returned 48 yards by future Seahawk Kevin Harmon (brother of Chargers Legend Ronnie Harmon), Iowa ran a few plays to get into better field position, and converted a field goal attempt as time ran out. The Aztecs lose 39-38.

Bed time, according to mom.

The Aztecs made me cry in bed.

On the Twitter @EgosAndDespair, where I mostly tweet about stuff that has nothing to do with why you followed me to begin with. Follow along! View all posts by Advisory Columnist