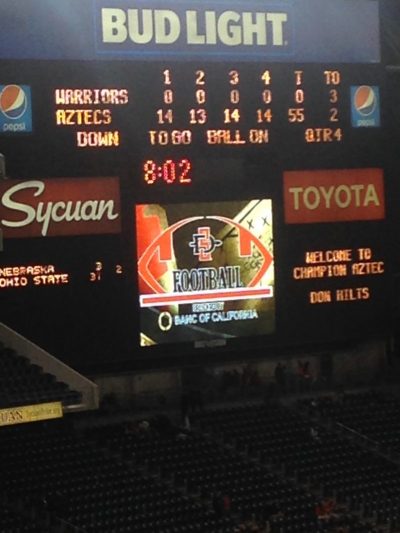 San Diego State’s tear through the Mountain West Conference over the past two seasons has been well-documented. The winning streak is up to 17. The point differential in five games this season is plus-154.

And Saturday evening, before a homecoming crowd of more than 41,000, the Aztecs might have achieved their most impressive and thorough torching of the MWC dumpster. Facing Hawai’i, a team widely considered the least bad of the absolutely putrid West Division, SDSU won 55-0 and clinched at least a tie for the division title.

It was the type of methodical, joyless beating that might seem cruel were this not the cutthroat world of college football where, if you’re in a lousy conference, the only way to get noticed by pollsters who can’t find your game in the channel guide is to deliver as big a walloping as possible.

This qualifies. Tomorrow, when the polls come out, we’ll find out what it’s worth.

I feel like the SDSU defense hasn’t been given enough love in this space. In my own defense, the unit wasn’t exactly stellar in nonconference and its improvement since has been overshadowed by that running back who keeps going apeshit.

#AztecFB has more points in the second half tonight (28) than it has allowed in Mountain West play this year (26 through four-plus games).

Speaking of those secondary suspensions, I’d like to introduce you to freshman cornerback Ron Smith, making his first career start. Let’s see how he did!

Say, pick six videos are pretty cool! Do you have any more we can watch? Maybe even one that broke a school statistical record?

That was Damontae Kazee’s second pick of the night and the fourth of the game for the Aztecs – three coming off pretty decent quarterback Dru Brown. Ronley Lakalaka, winner of the 2016 Lakalaka Cup, had the other. SDSU DBs also dropped two others that might have been run back for touchdowns. We were that close to 69-0, people!

What we have here, despite suspensions and season ending injuries to starters Randy Ricks and Na’im McGee, is a unit that is playing fast, confident and together. It’s quite a sight to see.

On the topic of sights to see …

When I watch Aztecs games, I usually jot down notes in my shitty iPhone 5. When I sit down to write afterwards, I usually disregard most of them. It seems that every week, I have something in there about Quest Truxton. And every week he just fails to make the cut.

Since this post is about trumpeting the overlooked, let’s talk Quest. He had a big gainer on a misdirection run play. He caught a touchdown pass. He wriggled free on two long punt returns. He’s shifty and fast and really fun to watch.

He also has the best name of any Aztec since a Polynesian dude in the Craft years whose surname was, like, 73 letters long. The back of his jersey just said “P.K.” This was a real person, I swear I am not making this up.

D.J. Pumphrey gained only 112 yards. Do you think everything is OK? I’m pretty worried, you guys.