You guessed it, comrades: student-athletes from San Diego State University played another intercollegiate basketball game, this one a 66-62 road win over Utah State. It bore little or no relation to national security, treason, компромат or any number of other potential looming crises. After all, there’s 351 Division I men’s basketball programs in this country and SDSU is but one of them! Really puts things in perspective when you step back and look at the big picture.

It’s a tired and well-worn cliché to say that one game is a microcosm. But. This game showcased inherent traits of the 2016-17 Aztecs in a nutshell: an athletic, highly talented team that can play lockdown defense and run anyone in their conference out of the building, and also an underachieving team that easily loses its way and can blow a lead of any size. And do it all with key contributors out with injuries.

Under other obligations I was unable to watch this game live. Fittingly, the start of the DVR playback was the conclusion of a Big East game. Creighton and Seton Hall bled over the 7:10 PM Pacific tip time, the broadcast joined with just under 15 minutes remaining in the first half and the Aztecs up 8-2. They promptly went up 10-2 on a short Dakarai Allen jumper, built a 20-9 lead and looked like the team that dominated Nevada on Sunday. Then other things happened and they took a 32-29 lead into halftime.

Utah State stayed close early in the 2nd half, then the Aztecs stretched the lead to a seemingly-comfortable points 13 with 4 minutes remaining. The Aggies pushed a desperate flurry, cutting the lead to 3 on a bonehead and-1 foul by Zylan Cheatham with 10 seconds left. After being fouled on the inbounds, Jeremy Hemsley made one of two free throws to seal the win.

The Aztecs came into the game as the 26th-best scoring defense in Division I, yielding an average of just 63.6 points per game, so the 62 points allowed to Utah State is a statistically reliable measure of success.

SDSU played without Valentine Izundu and Montaque Gill-Caesar, both sidelined with knee injuries because it was their turn to be hurt I guess. Their unavailability contributed to Nolan Narain – the Canadian sensation – getting some precious minutes. He looked okay! Redshirt frosh Narain drained 2 of his 3 shot attempts, including a three-pointer, while collecting 3 rebounds, a steal, 3 personals and generally looking comfortable in his 12 minutes. Notable considering he’d seen just one (1) minute of floor time since December (per Zeigs).

Cheatham had an underwhelming stat line and a couple of bad plays, but his defensive game and overall effort were excellent. One sequence stood out that will endear him to his coaches. Cheatham grabbed a contested rebound with 5:33 to go and was fouled under the opponent’s basket. He made the front end of the 1-and-1, converted the second, then blocked a shot at the other end. Way to hustle! Zylan got another swat and grabbed the rebound to keep the Aztecs up 9 with 2:40 left.

The game mightn’t have been so close had the Aztecs shot better than 12 of 19 from the line, but the Aggies were 12 of 19 on free throws too, and made just 8 of their 22 three-point tries.

Trey Kell and Hemsley carried the team, especially in the final winning stretch. Kell had 21 points, 7 rebounds, 3 assists, a block and a steal. Hemsley had 13 points and clutch scores late, though twice committed poorly timed fouls on shooters behind the three-point line. Allen had another great game on defense.

Malik Pope looked good early then disappeared for long stretches, as he is wont to do, finishing with 6 points in 27 minutes. Pope bricked an uncontested dunk off a sweet pass from Kell, Hollywooding a one-handed slam attempt which Utah State rebounded and scored the other way. This is now a trend.

I’m still not sure what to make of Max Hoetzel. He’s obviously a good shooter, but very streaky. One of his missed jumpers hit the top corner of the backboard. Yung Hoetz has put up 6, 0, 0, and 3 points in his last 4 games and is 2 of 17 shooting in that stretch, including 1 of 14 on threes. Yeesh.

Key stats for State
Only 9 turnovers for SDSU. The Aggies had 15 TOs, 8 of them steals by the Aztecs.

Utah State is 0-9 against SDSU since joining the Mountain West in 2013.

Stranger things
The CBS Sports Network analysts conveyed a couple of anecdotes about Aggies on Mormon missions. They said one player gained 20 pounds during his mission in Nigeria, while another got hit in the face with a rock and had to have surgery in Nicaragua. Such stories make me feel that, comparatively, I haven’t experienced as rich a life’s tapestry as these young men. They’ve traveled overseas to sell people on their belief system, then returned years later to play college basketball! I haven’t done either of those things. Then again, I don’t want to be hit in the face by a rock in Central America or anywhere else. Nor wear a tie with a short-sleeved shirt.

Play of the game
Utah State’s Jalen Moore made a soaring one-handed Dr. J dunk from outside the lane, put Pope in his poster and converted the and-1. The Aggie bench and fans reacted like Jordan had just dunked on Shaq: 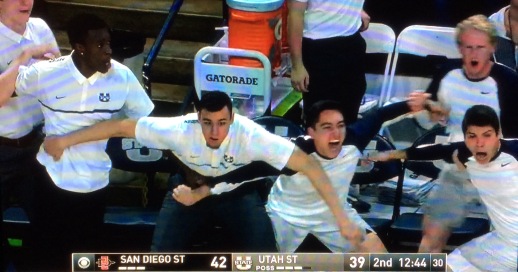 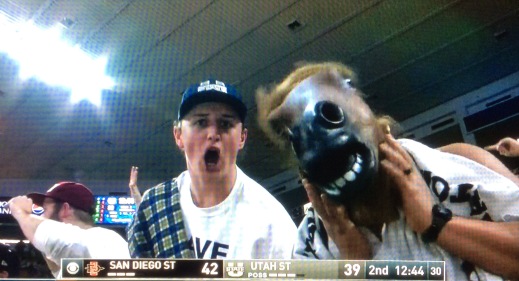 In summation; SDSU has moved up to 5th in the Mountain West standings, a middling spot nonetheless crucial for avoiding a play-in game in the conference tournament.

Next game
San Diego State hosts UNLV this Sunday at 1:00 PM, televised on CBS Sports Network. Yell at an undergrad to show up and fill the student section.