Not to distract from the Mission Valley Greyscale outbreak happening up on Montezuma Mesa at the moment, but assuming our entire roster isn’t quarantined for the next four months, the San Diego State football team does have a season of football to play.

A pretty important one at that!

Now, cliche coach speak platitudes will tell you that the most important game of the year is the next one on the schedule. And that’s a good message to keep 20-year-old players focused without looking too far ahead. But I’m not a coach. (For good reason. “No one expects a fake punt on 3rd down!”) So I get to look ahead as much as I want.

Here are the OFFICIAL POWER RANKINGS of the SDSU’s most anticipated/exciting/important games of 2017:

The Spartans are probably not the worst team in the Mountain West and that’s about the most exciting thing I can say about this game. It’s our third-to-last game of the year, so it’s possible we could clinch the West Division up in San Jose. But the real question is: if we’re upset, will the 17 people in the stands rush the field?

[Remembers we lost to SJSU in basketball this year and 17 people did, indeed, rush the court.]

This is one of those weird “out-of-conference game that comes after we’ve already played a conference game” games. It’s the week after a road trip to Air Force and would be last on this list if not for the fact that it’s at home and thus a thing we will attend. NIU was bad last year and is predicted to be similarly bad this year.

I was at the NIU game in Dekalb last year and actually had a great time. But the Huskies have no real connection to SoCal and UC Davis will assuredly bring more fans when they come to town. Unless we’re 4-0 heading into this game, it’s poised to be the least interesting match at the Concrete Tombstone this year

Barring something bizarre, (like a competent Fresno State or something. I don’t know, use your imagination) a win in this game should comfortably clinch the division title for us. That’s cool. It’s at home – also cool.

I just have a hard time having a strong opinion on Nevada. They’re just a slightly less sad version of San Jose State.

According to the Warriors’ official website, this game is on “ESPN Networks”, which means we no longer have to stream whatever Sega Dreamcast-powered broadcast network they’ve used for the past few years.

This team might be kinda, sorta, OK. They went 7-7 last year, including a bowl win on their home turf against MTSU. They actually finished second in the West standings behind the Aztecs. They’re picked to once again finish in second in this crapfest of a division. But also we beat them 55-0 last time we played, soooo…

I wouldn’t call this team “good”, but a road game on the islands is always a bit tricky. This game is mildly interesting only for the anxiety we’ll feel in the days leading up.

Ah, the first game of the year! The sun is shining, the student section is full (from midway through the first quarter until the end of the second) and optimism abounds. Coming off our best back-to-back seasons ever and with renewed community support, this has the makings of a truly special year for the Aztecs. Who could possibly have anything negative to say about this game?

In the last 11 years, we have more FBS losses then we do Power 5 wins.

It’s our first conference game of the year and our first regular season* match-up against the Falcons since 2014. I’ve read nothing about Air Force and their 2017 outlook, but I can tell you exactly how it’s gonna go:

(Except them when they play us because Rocky has never lost to Air Force since coming to SDSU and nobody hates change more than Rocky.)

This game will be fun because we are going to beat UNLV by a lot of points and by the universal truth of “fuck UNLV”, this is good.

Plus: Vegas! Last time we were there it went pretty well. I took a picture with a noble lord of Kicksteros! He was only moderately annoyed by it! 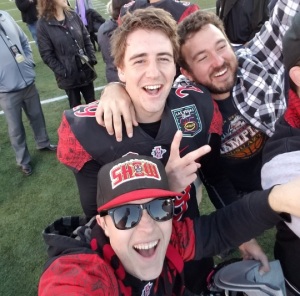 Ok, so I need you to sit down for this. Please, I’m serious.

There’s no easy way to say this, but, New Mexico won 9 games last year. In football. No, really. While playing in the vastly superior division of the conference. The only MW games they lost were to Boise State and Colorado State. I don’t know when or how this happened but it is strange and terrifying.

Thankfully they lost just about everyone and are picked to finish fifth in the division this year. Let us pray that this order is restored.

Anyway, this is the last game of the year and an extremely rare 12:30 p.m. kickoff time in San Diego. It also happens to take place on Black Friday, which I don’t see as any sort of foreboding omen at all.

Fresno State is trash. Trrraaassshhh. Which is wonderful. It wasn’t too long ago that the Bulldogs walked into the Mountain West and started pushing us around. Now, they are possibly the worst team in the whole damn league. Will this make destroying them at home in a rivalry game any less delightful?

No it most certainly will not.

We’ll laugh. We’ll high five. We’ll drink the tears of the Central Valley straight from the Old Oil Can. We’ll get listeria from doing that. We’ll spend days in the hospital. It’ll be great.

ASU is not going to be very good. They will almost certainly be one of the worst teams in the Pac-12. SDSU may even end up being favored in this game.

And I just don’t see the Aztecs winning it.

I honestly don’t know the last time SDSU beat a Power 5 team on the road. And while I definitely believe that this year’s Aztecs will finish the season as a better team than the Sun Devils, I think our early season inexperience will bite us in the ass on a brisk 95-degree Tempe night.

We’ve played bad Power 5 teams on the road before and I’ve been hurt too many times to get my hopes up again.

The good news is that while ASU is the worst Power 5 team we’ll have visited in quite some time, Stanford is easily the best Power 5 team to play us at Qualcomm in at least a decade.

The bad news is that we’re probably going to lose this game too.

Stanford runs the same OLD SCHOOL FOOTBAW style that we do, but they happen to do it with bigger, often better, players and at a competing-for-national-championships level. The best thing going for us is their schedule sandwiches us in between a trip to USC and hosting UCLA.

Let us pray that their gigantic seven tight end formations will fall victim to the ever dangerous trap game and we knock off a top 15 team at home. That would bring enough local hype to almost get the local radio guys to fit us in between their fourth and fifth LA Chargers segment of the day.

Hey! Look! A legitimately exciting home game with a big name opponent in an evenly-matched game with meaningful stakes on the line in the middle of the season! A convergence so rare I presume both teams will ride to the game on unicorns.

The two teams really seem to resent each other and if any team in the Mountain West is getting a New Years Bowl bid, this game is probably going to decided who gets it. At the very least it could decide who gets to host the MWC Championship (unless Colorado State just fucks it all up.)

Last year’s Cal game was huge in that it was an early test to prove the season really would be something special, but this Boise game right here is the biggest regular season MWC home game we’ve played since… since Fresno State was good?