Self-help guru Tony Robbins said — in an ad I saw during the Olympics — “Progress is happiness.” That’s really the key to the three-game win streak the San Diego State men’s basketball team is riding. After a sloppy first half the Aztecs tuned in, turned on and dropped a 67-56 defeat on Air Force in Colorado Springs. Dwell in bliss.

SDSU is healthy, playing with energy, defending hard, throwing alley-oop lobs and generally bossing their mediocre conference opponents as the gods intended. From their recent depths of despair it’s real progress, a promising path to happiness. Robbins, Ram Dass and James Naismith himself would be proud. I’m ready to walk across hot coals for these guys.

Colorado Springs is a lovely and scenic place I’m sure. But when “we” go there for football it’s a driving rainstorm or a windy icebox while the Falcons run their triple-option gadget offense and score 45 points. Come for hoops and AF runs a rinkydink Princeton offense hoping to finesse their way to a heartbreaking buzzer-beater.

As bad as Air Force looks tonight, you do understand the game in Colorado Springs will come down to the final possession, right?

That tweet was back in the bad place of 18 days ago, when SDSU stomped AF by 31 at Viejas but had gone 2-4 in their last six games. Then they got destroyed at Fresno and Nevada and the season looked very much like a trainwreck.

Now, after two big wins at home and this solid performance at 6,000 feet, the resurgent Aztecs are getting our hopes up for a conference tournament miracle.

Brotherhood of the traveling blood jersey

The blood jersey is the blank number 30 the equipment staff keeps on hand for eventualities, like a player bleeding on their regular jersey. What happens more often is a jersey doesn’t make it to the arena at all. Last night that was Nolan Narain’s number 24. He grew the blood-jersey pack by one, joining Valentine Izundu and Mad Max Hoetzel-Montana in the time-honored tradition.

Perfect for crudely ‘shopping KABEER onto. Presumably a backup blood jersey in another number exists so we’re grateful that 30 is still the default. “Bloodies” must exist in the home whites and the throwbacks as well, mythical idols to be revealed on some future date uncertain.

Nothing went especially well in the first half as the 26-23 halftime score attests. Matt Mitchell took care of that early in the second half.

SDSU freshman Matt Mitchell scores three 3s and a layup to have 10 points in the first 3 minutes of second half. Up by three at half, Aztecs now up by 14

That was pretty much the ballgame. Key stat: SDSU led for 36 minutes, 16 seconds; AF led for one minute, 56 seconds.

Jalen McDaniels followed up his double-double versus UNLV with a quiet game but made good choices as usual, scoring 7 points on 3 of 4 shooting with 7 rebounds. Malik Pope had another strong game (13 points, 5 rebounds, 2 blocks) and a posterizing one-handed alley-oop dunk off a Trey Kell assist.

Kell had just five points on 2 of 7 shooting but with eight assists. Germ Hemsley took it strong a couple times. Narain had a solid shift in his 10 minutes, taking some of Montana’s floor time and helping Kam Rooks to another DNP. Schakel threw his body around for 4 points and three boards.

The announced attendance at Clune Arena (capacity 5,858) was 1,868 souls — eerily similar to AF’s season average of 1,862 — and the sparse crowd didn’t look like either number. I think my high school drew more fans.

The top scorers for Air Force had 11 and 10 points, a forward and a guard respectively. One of them banked in a lucky-ass three, a weird curse that continues to be visited upon these Aztecs.

Air Force shot just TWO (2) free throws in the entire game and that was with 42 seconds left! I can’t remember a team ever having only one trip to the line. That’s … weird and bad for them. 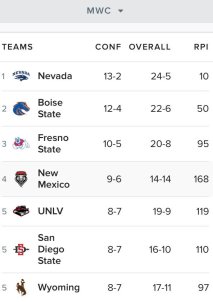 SDSU has clawed themselves back in position to claim a bye into the Mountain West tournament. It won’t be easy, with games remaining at home against Boise State and Nevada, but it’s doable. Git ‘er done.

The Air Force Academy has a few hallowed traditions, among them standing at attention for their morose dirge of a school song after ball games, a nice if humbling ritual for athletes that just got whipped on their home floor.

Coach Dutcher, architect of this three-game renaissance, affixed the faraway look of a man lost in thought as the band played on.

Saturday at conference-winless San José State, 7pm on ESPN3 (no TV). Do not, under any circumstances, lose this game.