Back  when things looked bleak for San Diego State men’s basketball, I would often try to break up all the bitter text in my grim recaps with a few visual aids. One of my favorite crutches was the win probability chart, because, hey, why expend brainpower writing angry words about another brutal loss when you can let a line graph tell the grim tale for you.

Anyway, here is what those charts looked like back then.

Say, would you like to see the win probability chart for the Aztecs’ Mountain West Conference semifinal game against the University of Nevada-Reno on Thursday night? 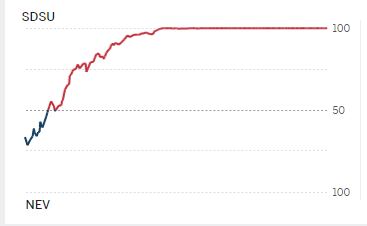 That is not a graph, that is pornography. That is exactly the kind of dangerous smut the Kansas City Royals were trying to warn us about  and you should probably clear your browser’s search history immediately.

SDSU’s eighth win in a row, a 90-73 stomping of No. 22 Nevada, was its most impressive to date. The Aztecs beat a ranked team for the second time in a week, this time so badly that Nevada’s Patrick-Bateman-lookin-ass coach was going full Eustachy midway through the first half (never go full Eustachy).

Technical foul on Coach Musselman, his first of the season. He's been all over Randy McCall all game. SDSU lead is now 32 points. I cannot explain this.

The lead got as high as 34 in the second half before Musselman started full-court pressing in an annoyingly vain attempt to turn an absolute goat rodeo of a loss into a run-of-the-mill blowout. Good job getting it under 20, I guess?

So how did this game get so out of hand? Well, it may have had something to do with the fact that SDSU hit all the shots, grabbed all the rebounds and guarded all the Nevadans. Pretty good formula, that.

SDSU shot 52 percent for the game and 61 percent in the first half which is so preposterous I don’t believe it even though I just typed it. You should probably disregard that obviously made-up stat. Guard Devin Watson had a 14 of his team-high 20 points in the first half, including three treys in the opening six minutes that set the tone nicely.

SDSU outrebounded Nevada 38-28, as freshman Jalen McDaniels — on the heels of a couple of quiet performances — looked aggressive as hell in the paint, grabbing 12 boards to go with his 17 points. Here, for the record, is what aggressive as hell looks like:

And here is Jalen basically being a freak of nature.

And here is Malik Pope doing some sexy stuff, too.

Jalen McDaniels feeds Malik Pope over the top as the Aztecs lead Nevada, 59-29, with 15:44 left in the second half. pic.twitter.com/ooLO2ktNmg

That's the way to finish! pic.twitter.com/Fe20z5bJ6E

Meanwhile, in the stands

What are they saying? Go: pic.twitter.com/oUjKe8CrNj

“Streaming Taiwanese media in China can be tricky, but fortunately I was able to set up my VPN without too much trouble so now I’m able to watch all my Cartoon Network Asia favorites whenever I want. Also I scored 58 points in a game a couple months back.”

One more win
After all the frustration and anger and despair this season has wrought, the Aztecs are a win over the New Mexico Lobos away from cutting down a dang net, hanging a championship banner in Viejas and going to the NCAA Tournament for the first time in three years.

But don’t get too cocky. New Mexico has won seven in row and has a ton of fans in Vegas. If you’re not in Vegas already, your presence is most certainly needed. Grab your gaudy Hawaiian shirt and get on the I-15 now.

Seriously, what are you waiting for?