I’m going to Wichita!
far from this opera for evermore
I’m gonna work the straw
make the sweat drip out of every pore
– The White Stripes, “Seven Nation Army”

When the San Diego State men’s basketball team settled in to watch the NCAA Tournament selection show, they surely were happy to go anywhere — except Dayton — and play anybody. After slow-rolling the reveal, TBS’ Ernie Johnson finally announced the Mountain West champs’ destination: Wichita, Kansas, to play the 21st-ranked Houston Cougars this Thursday at 4:20 PM (seriously).

Some pundits (or at least, a pundit) had projected SDSU would be sent to Boise for the first round. It was a logical guess, since Boise is the only other first/second round tourney site in the western U.S. and the Aztecs can’t play in the NCAA Tournament on their home floor.

San Diego State will likely be on the No. 12 or 13 seed line tomorrow, which is great news for the Aztecs. Pods involving No. 4 and No. 5 seeds are expected to be in San Diego and Boise, so SDSU will almost certainly make the short trip to Boise as it can’t play in San Diego.

On the other hand, it was illogical in that the NCAA selection committee seems to love making things kinda difficult for San Diego State and their fans. Oh well. We’re dancing!

Zeigler writes that getting an 11 seed is a nod of recognition for the strength of SDSU’s program. I dunno man. Sure, it is better than getting savaged by Kentucky in the first round. But a conference champ sent to Wichita to play a Top 25 Houston team doesn’t strike me as a big sign of respect. 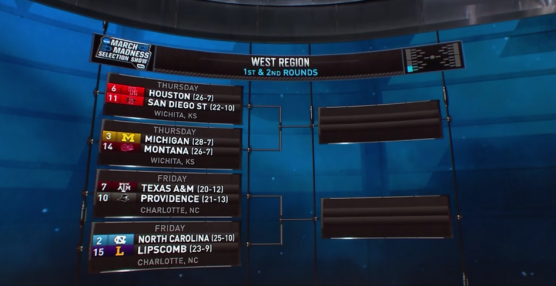 The committee did do San Diego State a solid by scheduling their game on Thursday. The school is hosting first and second round games at Viejas on Friday and Sunday. University and athletic department personnel would have been stretched thin if they were staffing the games in San Diego the same day SDSU was playing a tournament game in another city. And, locals who already bought tickets for the Viejas first- and second-round games won’t have to choose one or the other.

SDSU was placed in the West region, which makes being sent to Kansas seem weird, but does line them up to play at Staples Center in Los Angeles if they win two games and make the Sweet Sixteen. Also in the West bracket: GONZ.

MWC a three-bid league if you count Gonzaga

Houston, we are your daisy
San Diego State once again draws the Houston Cougars as a postseason opponent. D.J. Pumphrey and the football Aztecs stomped Houston in the 2016 Las Vegas bowl, putting the Fear into every Cougar athletic program. Houston (26-7) is a real good team, ranked and everything, though they did lose the American Athletic championship to Cincinnati on an bad turnover. The hangover of that close loss is bound to weigh on them like a shroud.

San Diego State has twice played Houston in men’s basketball, winning both games of a home-and-home in 2002.

If SDSU beats Houston they would face either Big Ten champion Michigan or the Big Sky champ Montana Grizzlies.

Should the Aztecs advance to the Sweet Sixteen in L.A. they would likely face defending national champion North Carolina. No worries! With six games at Viejas and SDSU’s ticket punched to Wichita, it should be a hell of a tourney no matter what. Catch the Madness.

Next game
San Diego State plays Houston this Thursday at 4:20 p.m. on TBS. Get your munchies ready.