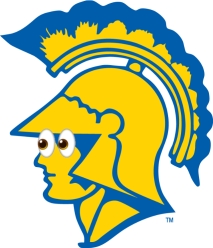 The Stakes
With a victory over the winless Spartans the Aztecs would actually have a decent chance of getting ranked on Sunday. I made a handy cheat sheet for you, loyal reader.

Your Get SDSU Ranked rooting guide for the week: pic.twitter.com/vsuosQMk8v

But what if the unspeakable happens? What if San José State spoils Homecoming by pulling the upset as a nearly four-touchdown dog? Well, it would only be the most embarrassing loss by SDSU football this decade, that’s what!

So it’s either Top 25 glory or abject humiliation — the two true outcomes.

San Jose State is a program with a proud history, and a hopeless present. The Spartans have little recent success, no fan support, no money and no real hope of that ever changing. Yet here they are, still fielding a foot-ball team in the year 2018, and dragging down the Mountain West in not one but two revenue sports.

SJSU is a lifeless zombie, mindlessly lurching around college football’s FBS landscape in search of … well, not brains exactly. A paycheck for a Pac-12 beatdown? Sure. Also, they’re basically like that zombie from the Walking Dead pilot that’s just a crawling, gurgling head and torso. You’ve got to try really hard to get bitten by this broke-ass zombie is what I’m saying.

The Spartans come in 0-6, and you can pretty much sum up their season so far with this Santa Cruz Sentinel story.

They lost to UC Davis and were shut out by Wazzu before notching a respectable-if-you-squint loss at Oregon and nearly beating Hawai’i and Colorado State at home. Last week, Army destroyed them by 49 in a game played at Levi’s Stadium in a glamorous, one of a kind showcase for Group of Five college football.

QB Josh Love, who passed for 451 yards and three touchdowns in the near miss against the ‘Bows, was scratched in the Army game with a concussion but should be back. He will look to connect with Josh Oliver, one of the best tight ends in the country (33 catches). SJSU needs big plays in the passing game to keep in striking distance because its running game (checks stats) is not a thing that exists, exactly.

Here’s the good news for struggling Aztecs offense: The Spartans have allowed either 300 yards passing or 200 yards rushing in every single game this season. Struggling again this week would be a very bad sign for the team moving forward. Also for my liver.

SDSU only leads the all-time series 20-19-2, but the Aztecs have a 16-5-1 advantage since joining Division I in 1969. SDSU has won five in a row in the series, with its last loss coming in 2012 to a Spartans team that finished No. 21 in the nation. Wait, what the hell? That clearly never happened, hang on. Well I’ll be damned. Also, did you know this is called the El Camino Real Rivalry? You probably did because we make fun of it all the time on this blog.

Red Out, Code Red — call it what you want, this has been bad juju and should go away.

Last year’s red-themed games resulted in a blowout football loss to Boise State and an embarrassing last-second hoops collapse against a putrid Cal squad. Losing to San José State would prove once and for all that red is a cursed color and should probably be removed as a school color entirely.

Look, you don’t want to watch clips from some Spartans loss and neither do I. Let’s just go with the Alonzo Carter dancing on Ellen clip and call it day.

AttemptedChem @attemptedchem
Halfway through the regular season, the Aztecs have wildly exceeded expectations with a Pac-12 win under their belt and a legendarily gutty win on the Blue Turf at Boise State. They’ve also come very close to losing at home to Sac State, Eastern Michigan AND Air Force! SDSU has simultaneously proven to be a gritty, mature team that can grind out a win late, while also letting us know they could probably lose to just about anyone on any given night.

AztecsKillingHim @AKH_blog
The SDSU offensive line really hasn’t looked like itself in about a month and I have a feeling this will be a get well game for that unit. The hobbled Aztecs still don’t really have the offensive firepower at the moment to cover that ridiculous spread, but I expect SDSU to rush for 200-plus yards, finally eclipse the 28-point barrier and generally get back to looking more like SDSU.
Aztecs 37, San José State 7

lemonverbena @kabeerthirty
San José State has been playing Division I football since 1950. The program has enjoyed only infrequent bursts of success, most notably under former SDSU head coach Claude Gilbert in the mid-’80s. But since joining the Mountain West in 2013 SJSU has gone 6-6, 3-9, 6-7, 4-8, 2-11 and 0-6 so far this year. After this, their 69th season in D-I, they should do the nice thing. Pull the plug, Old Sparty. Stop playing football.
Aztecs 34, San José State 13

One thought on “Game Preview: San José State at Aztecs”