San Diego State University, the city’s oldest institution of higher education, lost a men’s basketball game on its home floor to the University of San Diego, a private Roman Catholic college off Friars Road, undergraduate enrollment 5,855. It was a sad thing to witness.

Do any of us want to dwell unnecessarily on the ugly 73-61 loss that handed the City Championship to USD? Not me, palooka, and probably not you. 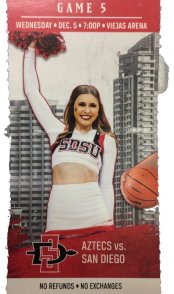 I brought a friend who had never been to Viejas Arena nor seen a San Diego State game of any kind, though has been to the Maui Invitational and games in other cities. Paraphrasing her observations: number 11 has a big butt (she implored me to “look at it!”) and number 20 “doesn’t look like a natural player.” Accurate.

Losing to USD is bad harbinger for SDSU’s tournament hopes if contemporary history is any guide. The 2015 Aztecs that lost the horrific outdoor debacle at Petco went 16-2, won the Mountain West regular season title and were snubbed by the committee.

This Toreros team is much better than four years ago. But even counting the blowout against Iowa State in Maui, this is the season’s worst loss (so far) for the transitioning Aztecs. They say the City Championship isn’t a rivalry, but it is now whether they like it or not (they don’t).

The last three Aztecs games I’ve seen in person were the UNLV football loss, the Hawai’i football loss and this USD loss. Maybe it’s my fault.

Turning point
When the game officials walked out of the locker room with whistles adorned with the USD logo. Many people are saying Joan Kroc herself reached a cold hand from the great beyond and slipped a few bills in the refs’ pockets. Really disgraceful.

SDSU led 33-29 at halftime. Then the Toreros’ sixth-year seniors started dialing in that pick-and-roll Princeton bullshit and the worm turned for the worse. For our team. We lost! Goddamn it. Once upon a time, we ran Cali. Now we don’t even run the 8 West.

Toreros killing us with the three point field goal

SDSU made 5 field goals of any variety in the 2nd half. Five. That won’t get it done.

What’s next for the men’s basketball Tecs
Suddenly desperate SDSU heads up to Berkeley to take on the bad Cal Bears this Saturday at 7:30 p.m. It’s on Pac-12 Network, so good luck with that.