One month ago, Brian Dutcher was a lousy hire. He was in over his head and had obviously lost the locker room. All was lost. #FIREDUTCHER

Lest you think this is some kind of self-satisfied blog version of a subtweet, here’s some Valentine’s Day snark from yours truly which I will now officially own up to.

One month ago, Trey Kell was a tragic story. The San Diego native was a key part of a vaunted recruiting class that disappointed, producing diminishing returns every single season. The tragedy was capped with a cruel senior campaign that saw him injured and sick and injured again.

Today, the first-year head coach and the hometown senior capped off one of the most stirring comeback stories in San Diego State sports history, beating the New Mexico Lobos in an excruciating-thrilling-horrible-wonderful 82-75 come-from-behind victory in the Mountain West Tournament title game in Vegas. The Aztecs will go to the NCAA Tournament for the first time in three seasons thanks to an improbable nine-game winning streak that had the kind of redemption arcs you only see in sports movies where the main character is a golden retriever or a field goal kicking mule.

And it feels fucking incredible.

END_OF_DOCUMENT_TOKEN_TO_BE_REPLACED 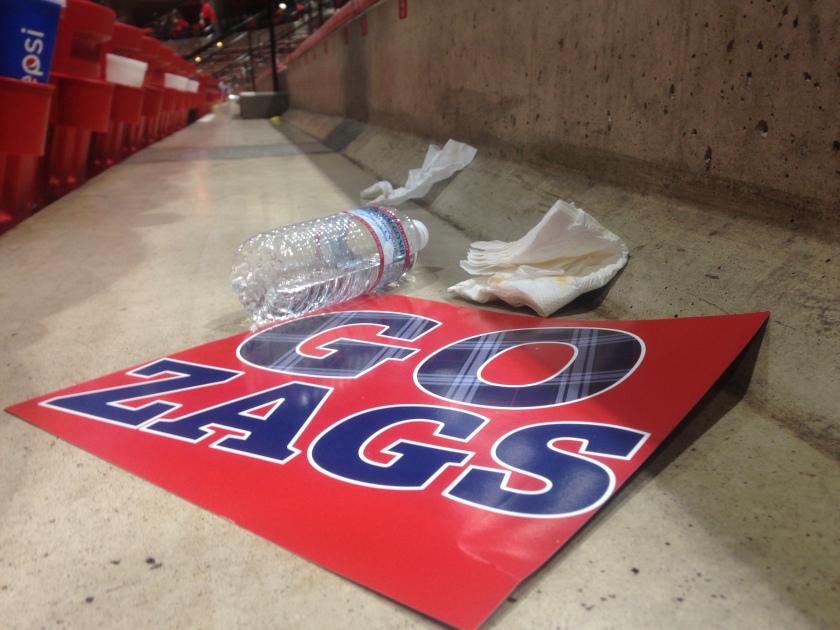 The court storming was denied, with extreme prejudice.

As the final tenth of a second ticked off in the San Diego State men’s basketball team’s 72-70 upset of No. 12 Gonzaga on Thursday night at Viejas, a couple dozen scruffy students made a run at a handful of Elite Security’s finest. The wave was repulsed, with one particularly rambunctious student getting hauled away into the tunnel by the enraged off-brand Pinkertons.

It was honestly kind of a shame. If ever there was a game that deserved a court storming — a sweet release of two and a half years of unrealized expectations and general malaise — this was it.

The Aztecs didn’t beat just any ranked opponent. This was Mark Few’s mid-major blue blood, a reloaded squad that returned two key starters off a team that was 7 points shy of the National Damn Championship just a few months ago. This is easily SDSU’s most significant regular season win since Kansas at Phog Allen in 2014. And unlike that time, I don’t think any of us really saw it coming.

END_OF_DOCUMENT_TOKEN_TO_BE_REPLACED

Before I dive into the SDSU men’s basketball team’s win over THE ESS-EEE-CEE on Friday, I must offer an official mea culpa. It was fewer than two weeks ago that the Aztecs played a half of basketball in Tempe so heinous that I kind of had a nuclear meltdown in the game recap. I thankfully stopped short of calling this a lost season, but I sure didn’t imply that it wasn’t.

Since then, SDSU has handily beaten three really bad teams, which could easily be dismissed as irrelevant on account of those teams being really bad and stuff. But this — a gutsy 75-68 win over a possibly pretty respectable Georgia Bulldogs squad in the Wooden Legacy Tournament semifinals — was something else.

END_OF_DOCUMENT_TOKEN_TO_BE_REPLACED

Steve Fisher won 386 games as head coach at San Diego State University. That’s a lot of wins! So many, in fact, that it would be a fool’s errand to attempt to pick only 10 that stand out among the rest.

On the other hand, this is a blog on the internet. So, uh, I made a list.

Anyway, here are the 10 best victories of the Steve Fisher Era. Know that if you disagree with anything here it is because you are dumb and bad and don’t appreciate Steve Fisher at the same level I do.