In their third stress-inducing home victory in three weeks, the San Diego State football Aztecs came from behind to beat Eastern Michigan 23-20 in overtime. The EMU Eagles do not identify as emus, but much like the freakishly tall flightless bird, proved stubborn and hard to knock over nonetheless.

Despite running their record to 13-0-1 against the Mid-American Conference, it turns out the Aztecs don’t really want that MACtion.

The Aztecs let the big birds of Ypsilanti hang around when they seemingly didn’t have to. Ryan Agnew — the new guy with mobility, the Texas Kid — led two great drives in the first half, hitting touchdowns passes of 25 yards on a nifty rollout and 24 yards on a blown coverage.

SDSU was up 17-3, the defense forced EMU to punt on the next series and the Aztecs were rolling.

Then Agnew did a thing he’d like to avoid, floating a weird interception the Emus returned to the Aztecs 34. Four plays later Eastern Michigan’s option QB Mike Glass punched it in. Instead of SDSU going up three scores, the random directional school was only down 7 points at halftime.

The shocking anomaly of a Lord Baron miss also rattled the collective confidence.

Baron missing is quite the canary in a coal mine.

With Juwan Washington on the sideline with his arm in a sling (he’ll be OK apparently), the offense sputtered in the second half. EMU started dominating the line of scrimmage, confidently raising their fists and hootin’ and hollerin’ as the third quarter ended. SDSU was getting bossed around on its home turf by a mid-major filler opponent, albeit one that went to Indiana and beat Purdue two weeks ago.

But the Aztecs had just bossed around a quality Pac-12 team last week! Maybe that worked against SDSU as they tried to get hyped for an opponent the school had never played and likely most of them had never heard of.

It was a frightening half to witness. The dread of the South Alabama loss began to creep in. The offense couldn’t get the ball back and couldn’t put points on the board.

Then, it happened: Another Goddamn Blown Call That Could Have Cost Us the Game.

What should have been a completion and a first down in the red zone turned into a -1 yard sack when the refs blew a whistle for going out of bounds, which Agnew clearly had not done. Lord Baron, Second of his name, Protector of the Realm, calmly stepped into the fray and nailed a 50-yard field goal to tie the game.

For those counting at home, that’s two weeks in a row the Aztecs have needed to save themselves after a crucial blown call late in the game. Fortunately for our heroes, the breaks started rolling their direction after Baron canned the 50 yarder.

SDSU held off EMU in the last minute to force overtime and won the toss, which is pretty big in the goofball college overtime rules, since you get to defer and have the last chance to tie or win. That set up the highest-leverage play of the game, or put another way, the …

EMU took the first possession of overtime at the 25. After a short gain, Golden Emu quarterback Glass felt pressure and underthrew a duck toward the goal line. Freshman corner Darren Hall high-pointed it for a pivotal takeaway and his first career interception.

The offense then only had to not fumble and line up the game winner for Lord Baron the Redeemer. And redeem us He did. Hail and honor him! For He is the best we have ever seen, or are likely to see again.

Incredible. Thank you, gentlemen, for this profound gesture.

CBS Sports Network at 1:54 am before Eastern Michigan and San Diego State go to overtime pic.twitter.com/OeMSNKp0iE

Rock-o-Meter
Rating Rocky Long’s likely enjoyment of the game, on a scale of subtitled French coming-of-age film to 1977 Trans Am with radar detector.

Tonight’s game rated a clean motel room off the main highway when you’re tired after a long drive on the Rocky scale.

Rock can break a smirk after running his SDSU winning percentage to 69 percent. But it was a hard slog against a tough opponent that came into our house and punched us in the mouth. Sometimes you have to gut out close wins and Rock’s proud of his guys for finishing. Lot of character on this team.

The announced house at the old Tombstone was 30,898. That’s a fair number from where I was sitting. The student section was full and the rest of the crowd spreads out in the cavernous venue. Unfortunately, with another late start and a game that ended after 11 p.m., at least half the crowd left by the fourth quarter. 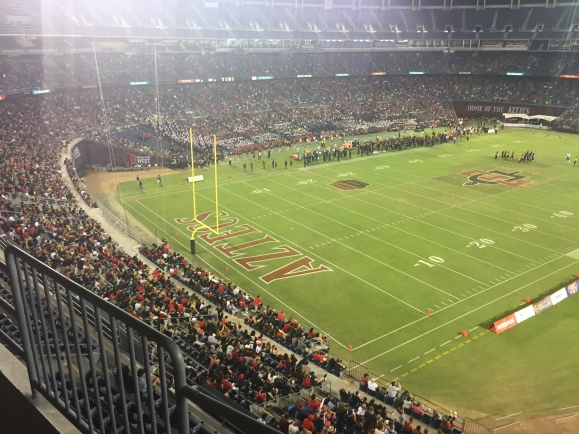 What’s Next for the Football Tecs

By the by, the Aztecs are on a BYE next week. And not a moment too soon. SDSU starts conference play with a bang at Boise State on Saturday, October 6, time still TBA.