On Saturday morning, still buzzing from the glory of the Aztecs’ victory over Fresno State, I sat and drank a beermosa from a vintage oil can. Not the vintage Oil Can, mind you, just one I found at the dump and hastily rinsed out with warm water. Totally sanitary.

It felt good, and it should have dammit. Fresno State is a bad school for bad people and they do not deserve to possess even the most contrived, rusted-ass piece of scrap metal.

Anyway, amid my exultation, I decided to do what any red-blooded sports fan would do: Troll the local sports columnist over a bad take he had more than a year ago. It’s the American way!

@AKH_blog Hahaha. You're not really gloating? It's the Mountain West.

The local columnist’s response was appropriately snippy, considering I was being an ass by mocking his “Fire Rocky” take from early 2015. But the more I thought about the underlying point of his retort (other than the implied “FUCK YOU ANONYMOUS BLOGGER BOY” which, again, is fair), the more I kind of take issue with it.

While the #FireRocky crowd has rightly been beaten into submission over the course of the past calendar year, I feel like the job Rocky Long has done over his six seasons at San Diego State still gets unfairly maligned by the “yeah but Mountain West” qualifier.

It’s admittedly hard to dispute! The Mountain West is, in fact, a top-heavy league of mostly weaklings, with two solid programs (Boise, SDSU), a few decent programs depending on the week (Air Force and … I dunno, Colorado State, Wyoming and Nevada? Sure.) and a bunch of flaming wreckage (Hi there, Fresno!).

As such, a lot of fans have this view of the Mountain West as a fallen empire. They pine for the days of BYU, Utah and TCU making national waves and propping up the conference’s reputation. The implication, then, is that much of SDSU’s recent success can be attributed to those teams being gone.

The only problem with that implication is that it’s complete bullshit.

For another, this isn’t the first time the Mountain West has been this weak. In the first four seasons of the conference (1999-2002), BYU and Utah were mediocre and TCU hadn’t arrived yet. Colorado State (!!!) was the honest-to-god heavyweight of the conference.

And still, the Aztecs still couldn’t muster a winning season. In fact, in the decade prior to Rocky Long’s arrival on the Brady Hoke staff in 2009, SDSU was pretty damn bad against the teams that make up the *current* MWC. 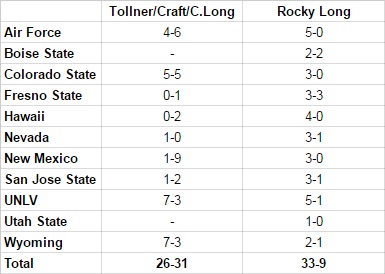 Now? We have a coach who has won 13 straight against these teams – 12 of them by two touchdowns or more. We can all agree that’s good, right?

That is not to say there aren’t legitimate lines of criticism against Rocky. Being 2-8 against the Power Five is sorta bad. Being 0-3 against the Sun Belt is, uh, something.

But 33-9 against current Mountain West members is nothing to derisively sneer at. And while there might be other coaches who could have guided the Aztecs to a similarly-stout winning percentage, most of those coaches would have moved on to a Power Five job well before that 33rd win.

So maybe don’t gloat about it.

But there’s no need for Rocky – or us – to apologize for it, either.

Editor’s note: Yes, we are fully aware that publishing this hubris-soaked story about MWC dominance may cause the Aztecs to struggle against San Jose State on Friday. We deeply regret this.